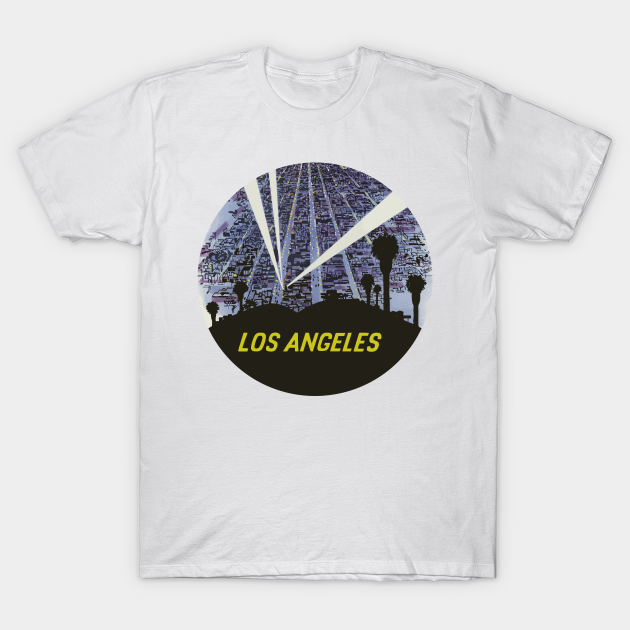 Los Angeles – City of Angels – Created this design from a vintage travel poster. You can buy the t-shirt in my shop on etsy – LA Los Angeles Movie Spotlight Palm Tree Design Short-sleeve | Etsy

This is an exclusive shirt and can only be found in limited quantities on Etsy.

A little vintage blurb about Los Angeles from 1941

Los Angeles has the characteristic of every modern American metropolis: public and private libraries, museums, and art galleries; colleges, universities, and technical schools, some of them with high reputations. The popular concerts, the numerous book stores, and art shops, the writers’ and artists’ clubs, and the little theatres attest to the presence of cultural awareness. Cultural Los Angeles, however, is not so much the outgrowth of native movements and traditions as it is the product of a recent influx of talent of all kinds, attracted chiefly by motion pictures.

The work produced by the hundreds of writers, musicians, and other artists who have come to Hollywood does not reflect the native scene. Los Angeles, as a locale, has inspired few outstanding works of literature or art; nor has the city developed a creative school of thought outside the motion-picture industry. It is possible, however, that in time a distinctive native philosophy and cultural cohesiveness may develop among the great numbers of gifted persons gathered together in this area. If such a development occurs, Los Angeles may well become one of the world’s most influential centers of culture.

Los Angeles is in a region where rugged mountains, cleft by deep gorges, tower in peaks 10,000 feet above sea level; a region of forests and wide deserts, rolling foothills, fertile valleys, and seasonal rivers that sweep to the sea; a region with craggy shores, strands, capes, bays, and verdant islands washed by the Pacific Ocean. So diversified is the terrain that motion-picture studios film stories laid in African deserts, Alpine peaks, the South Seas, and a dozen other “foreign” places, without going more than 100 miles from Los Angeles.

Los Angeles County, measuring approximately 75 miles from north to south and 70 miles from east to west, covers 4,083 square miles, about half of it mountainous. Roughly, the northern part of the county is made up of desert and mountains, and the smaller southern part lies on a broad plain that slopes gently from the mountains to the Pacific. Most of the 451 square miles of the city of Los Angeles is spread over the plain, the city’s downtown district lying midway between the mountains and the sea. Ranges north of the city separate the urban area from the Mojave Desert.

In the San Gabriel Mountains, rising from the coastal plain, and less than 40 miles from the sea, are nine peaks more than 8,000 feet in height. Loftiest of these is Mount San Antonio (Old Baldy) 10,080 feet, and Mount Baden-Powell, 9,389, whose crests are some- times snowcapped. To the north, nearer Los Angeles, the San Gabriel Mountains rise more than 7,000 feet and are gashed by numerous canyons down which streams tumble seaward during the spring. West and northwest of Los Angeles are two smaller ranges, the Santa Monica and the Santa Susana Mountains.

The Santa Susana, the more northern of the two, reaches a maximum elevation of 3,956 feet and with the San Gabriel Mountains, forms the northern boundary of the San Fernando Valley. In this wide, fertile valley, approximately twenty-two miles long, are three towns, several smaller communities, and a part of Los Angeles. The Santa Monica Mountains form the southern boundary of San Fernando Valley, while still farther west, their embayed southern slopes mark the north shoreline of Santa Monica Bay. Their highest point is Sandstone Peak, 3,059 feet high.

This site uses Akismet to reduce spam. Learn how your comment data is processed.